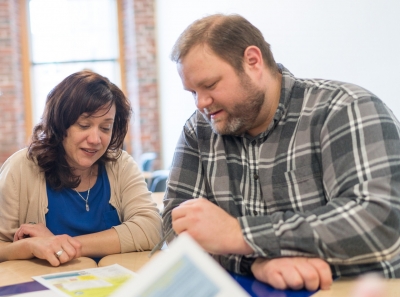 Ryan Buchanan is a fifth-generation service member and a first generation college graduate – both of which he is quite proud.

Buchanan joined the Navy right out of high school in 2004 and served for four years. When he completed his service, he enrolled in community college in Virginia where he earned an associate degree in criminal justice.

He started taking classes toward a bachelor’s degree when his wife, still in the Navy at the time, received orders to transfer to Gulfport, Miss.

Buchanan put his schooling on hold and took a job managing a Game Stop retail store.

“I learned a lot about business while working there,” says Buchanan, who helped turn around five underperforming stores. “I really liked the challenge, but once the stores were turned around, I’d get bored and was ready for the next challenge. I like to keep busy.”

When his wife completed her service with the Navy in 2015, she let him choose where they’d call home next.

“I wanted to be closer to my family, so we came to New Hampshire,” says Buchanan.

With his family finally settled, and Buchanan eager to busy himself again, he set out to finish what he’d started in Virginia and earn a bachelor’s degree.

“My dad was always limited by his earning potential because he didn’t go to college,” says Buchanan. “If I wanted to have a better life for my kids, I knew I needed to go back to school to finish my bachelor’s degree.”

Buchanan was accepted to the University of New Hampshire at Manchester in 2016 and decided to major in business with a focus in accounting.

“I’ve been completely blown away by the high caliber of student that goes to UNH Manchester,” says Buchanan. “They are focused, dedicated and intelligent. I’m very proud to be able to count myself among the ranks of students at UNH Manchester.”

The college community is equally as proud to have Buchanan. This spring he was selected as the recipient of the Ryan M. Pitts ‘13 Scholarship recognizing his contributions to the college community. The award was established in 2016 in honor of alumnus Staff Sergeant Ryan Pitts, Medal of Honor recipient, to provide financial support to students who are veterans of military service.

“Ryan Buchanan is a positive presence on campus. He has welcomed new students to campus as an Orientation Leader, assisted others in their job search as a Career Peer and planned events for student while working in the Student Involvement office," wrote Josh Felch, coordinator of student involvement, in his nomination of Buchanan. "He is a hard worker and is able to balance his many responsibilities on campus with being a father and husband. He has been a strong voice advocating for his fellow student veterans and has really made an impact here at UNH Manchester.”

Buchanan earned his bachelor's degree on May 17 and plans to run for the New Hampshire House of Representatives.

“My family and I are making our home in New Hampshire,” says Buchanan. “I was able to choose to live here rather than the military telling me where to go. I want to help make a difference.”