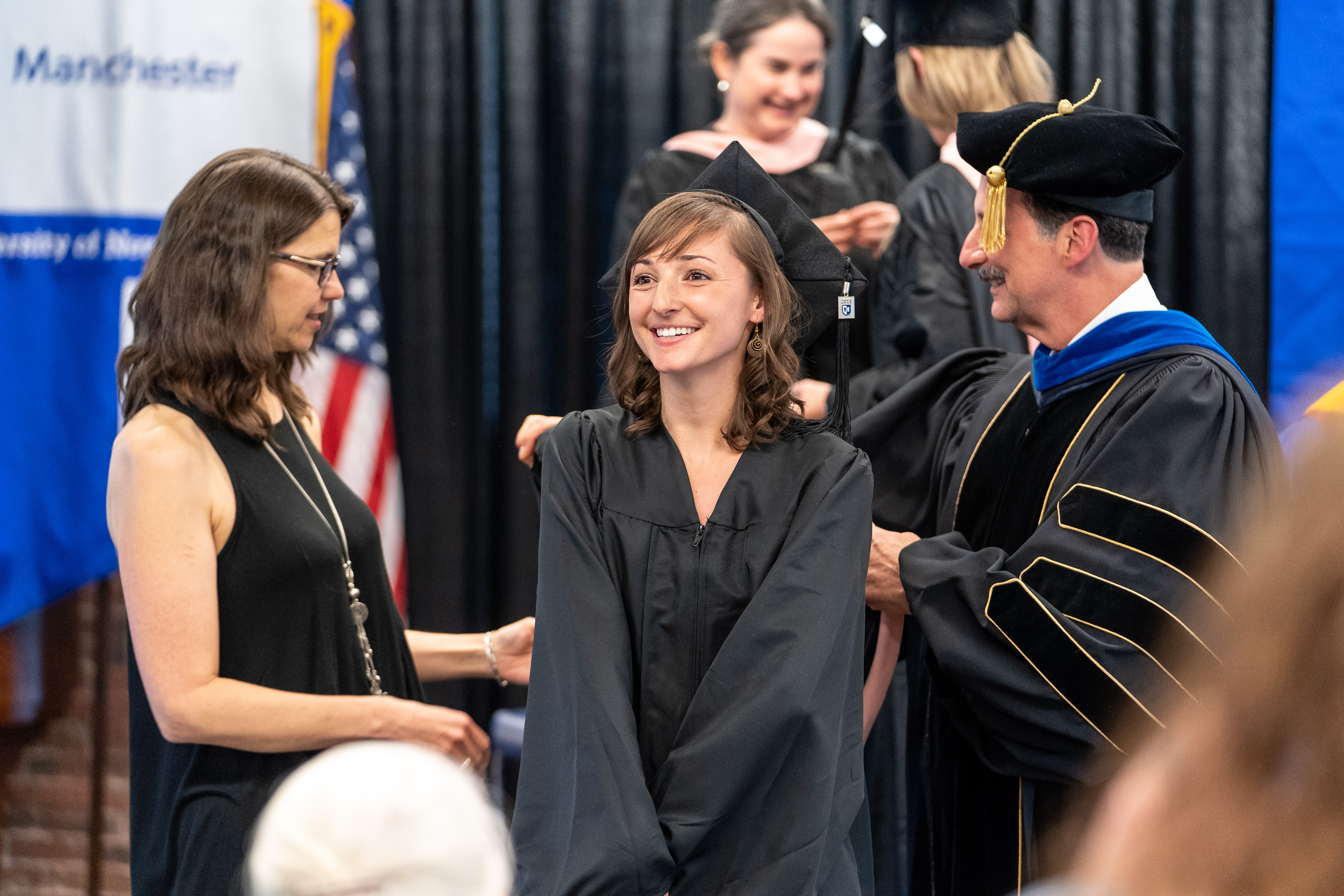 Each year, the New Hampshire Public Health Association awards the Rising Star Award to a public health professional who has contributed to, and shows significant potential in, the field of public health. This year that recipient was Sara Rainer, a Master of Public Health (MPH) candidate a UNH Graduate School in Manchester.

“It was unexpected, and I am deeply honored to have received the Rising Star Award,” Rainer said. “It reflects my growth as a public health professional over the last few years.”

Rainer grew up in Massachusetts, where she developed a passion for public health through volunteerism with disability organizations.

“I have a family member with a disability, and much of my childhood was spent volunteering for different disability-related organizations with my family," Rainer said. "I also worked at a summer camp for kids and adults with disabilities, which is where I first started to develop my passion for working with people with disabilities.”

Rainer started her undergraduate education at UNH's Durham campus, studying History and Classics with plans to pursue a Juris Doctor degree and become a lawyer. She had a lifelong interest in serving the underserved, but she never considered it to be a career until meeting Charles Drum, former director of UNH's Institute on Disability, during a restaurant shift in her junior year.

Through her work at the Institute on Disability, Rainer met Semra Aytur, associate professor of Health Management & Policy. Aytur invited her to work on a “photovoice” project as an independent study, working with a group of youth with disabilities. Conducted with a group of interdisciplinary professors, the goal of the study was to become in tune with the experiences and perception of subpopulations.

“Sara exemplifies the spirit of public health in terms of her commitment to equity and social justice, particularly for persons with disabilities," Aytur said. "​She displays a genuine love of interdisciplinary learning and a natural proclivity for integrative thinking, which inspires her peers, her professors, and her colleagues."

Rainer continued to stay involved after the project was completed, leading to her receiving the UNH College of Health and Human Services Ritvo Award for research on empowering youth athletes with disabilities, in collaboration with Northeast Passage.

During her time at the UNH Institute on Disability as an undergraduate, Rainer worked on a Center for Disease Control-funded project that promoted inclusive public health. She dove into the world of disability and public health during her senior year, leading to a full-time job offer at the Institute upon graduation.

“I started to learn about the significant differences in health between people with and without disabilities," Rainer said. "The more I learned about avoidable health differences, the more I fell in love with the work I was doing."

It wasn't long before she decided she was ready to pursue a master's degree. She chose the Master of Public Health at UNH Graduate School's Manchester campus, which allowed her to build her school schedule around her life as a working professional.

“The MPH program at UNH Manchester offers a wide variety of hybrid classes, and a lot of professors are really flexible," Rainer said. "I’ve been working full-time for quite a while and I’m still able to participate fully in the program.”

During her time in the MPH program, Rainer completed internships at the Division of Public Health Services and at the New England Regional Health Equity Council, where she helped write reports about differences in health among several racial and ethnic minority groups and people with disabilities in New England. She is also a co-author on an upcoming manuscript in the Therapeutic Recreation Journal.

The MPH program works closely with the New Hampshire Public Health Association, bringing together working professionals in the field with those who are starting to explore public health. Rainer said this collaboration has been an important part in building her network.

“These two avenues create a unique culture of working professionals who are dedicated to improving the health of NH residents," Rainer said. "I have met so many people in the public health world, and have developed really strong connections here in the state."

Rainer plans to continue her education in the field of public health behavioral sciences.

Learn more about the Master of Public Health program