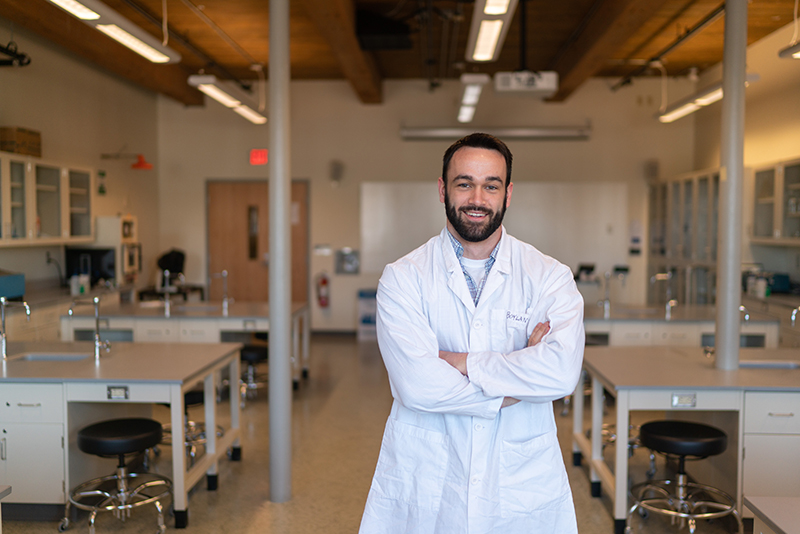 Evan Boylan '18 always knew he would enlist in the military. He was inspired by his father who served in the Navy and by a desire to see the world and get a sense of perspective. So, after graduating from Nashua High School South in 2011, he enlisted in the Marine Corps.

Boylan served for four years, including a seven-month tour in Afghanistan, before returning home to New Hampshire. He wasn’t quite sure what he wanted to do for a career, but he knew he wanted to do something that mattered.

“When you get out of the military, it can be difficult to adapt to the loss of identity and shared purpose,” says Boylan. “You get used to the structure.”

Boylan had taken basic first aid in the Marines but also had the opportunity to do a more in-depth trauma training called Tactical Casualty Combat Care. This sparked his interest in the medical field, spurring him to enroll at Nashua Community College where he completed two terms before transferring to the University of New Hampshire at Manchester.

“I was attracted to UNH because of the more varied course availability and challenging atmosphere,” says Boylan. “The student body is extremely motivated, which I also really appreciate.”

After taking several different courses, Boylan's interest in medicine and research led him to choose biological sciences as his major. Boylan, who is co-president of the TriBeta honor society on campus, says being in class alongside fellow career-driven students helps keep him motivated.

Boylan's biology courses are not only going towards his UNH degree—they are also meeting coursework requirements for his Master of Physician Assistant Studies. Thanks to an affiliation agreement with MCPHS University's Manchester campus, Boylan's UNH courses have also fulfilled prerequisites for the M.P.A.S. He will begin courses at MCPHS in January 2019.

With graduate school on the horizon, Boylan plans to finish his Emergency Medical Technicians certification while working part-time as a brewer with Anheuser-Busch in Merrimack, NH. He also plans on spending a lot of time studying and preparing for graduate school so he can hit the ground running.