Drumming Up a Future in the Music Industry 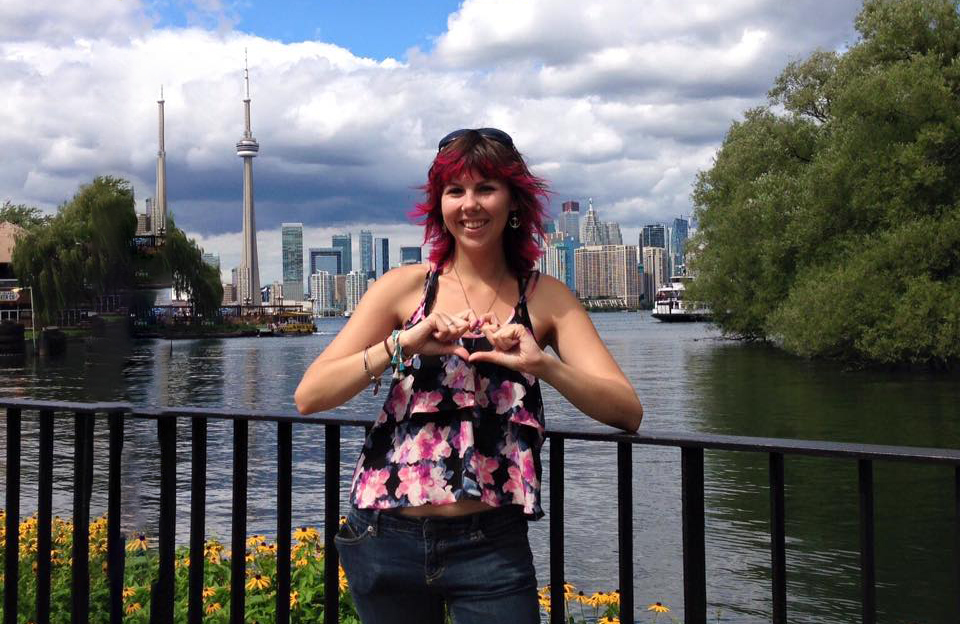 Angela Mastrogiacomo '10 has always dreamed of a career fueled by passion and creativity. So the Hudson, N.H. native decided to make her dream job herself.

The communication arts graduate has turned her love for music into her life’s work, running her own music public relations firm and managing her self-launched music blog. Like many who want to break into the notoriously competitive music industry, Mastrogiacomo’s dreams didn’t come true overnight.

After graduating from Alvirne High School, Mastrogiacomo decided to enroll in the journalism program at the University of Rhode Island. She loved writing—filling notebooks with imaginative stories since she was a kid—so journalism seemed like the natural choice.

“I always wanted to do something with writing, which is why I chose journalism first,” Mastrogiacomo said. “But that taught me what I didn't like, and it turns out I don't like traditional journalism. I like the more creative aspects of writing.”

In 2009 she decided to transfer back to her home state, enrolling in UNH Manchester’s Communication Arts program. It was then that she found the creative freedom she craved, and the inspiration to launch her own music blog.

On a brisk evening in March, Mastrogiacomo went to see her favorite band, Anberlin, in concert. But it was the opening band that ended up putting her on a career path.

“I felt like I connected with the opening band, and I just wanted to tell people about them,” Mastrogiacomo said. “I just really wanted to talk to them, and they agreed to an interview. And I thought, why stop there?”

As Mastrogiacomo racked up more interviews, her content grew—and her online blog, Infectious Magazine, was born. What started out as a promotional outlet for up-and-coming musicians soon gained traction among national bands. Mastrogiacomo was also working and going to school, and while she was passionate about her foray into the music industry, she didn’t expect it to become more than a hobby.

“I’m a pretty anxious person, so whenever I do something it becomes this all-in, very intense thing,” Mastrogiacomo said. “But I didn’t expect a career out of it. It was just an exciting way to pass the time.”

Mastrogiacomo graduated with her Bachelor of Arts in Communication Arts in December 2010, when the economy was still recovering from the recession. After eight months of searching and filing applications, she landed a job at a startup—which she loved, but unfortunately the company went under soon after. She found another position, and was laid off. Then onto another, an office job that made her feel unhappy and unfulfilled.

“I was miserable, and I knew it wasn’t working. I’m not the type of person who can just settle,” Mastrogiacomo said. “I knew I needed to think of a way to support myself and still do something I love.”

Infectious Magazine was still going strong, and Mastrogiacomo had even brought interns onboard to assist with the growth. As she thought about her next step, it donned on her: She had spent years on the receiving end of press releases with her blog. Why not be on the publishing end?

“I’d already built up all these connections in the music industry, working with bands and labels and publicists. I had seen firsthand what worked and what didn’t work,” Mastrogiacomo said. “I realized I could do public relations and earn a living while still helping bands and writing, and doing all the things I enjoy.”

As with Infectious Magazine, Mastrogiacomo started small. She did some test runs as a publicist for her friend’s band, then started charging minimally as she built her clientele. Her growing network, industry experience and passion to help artists served her well—and in 2014, she officially launched Muddy Paw PR.

“It came from a point of necessity where I was unhappy in a regular job, and I just had to fix it,” Mastrogiacomo said. “It turned out really well, thankfully. And it all started because I fell in love with a band, and wanted to do something about it.”

Now, Mastrogiacomo is focused on catapulting Muddy Paw’s growth. The business is in a comfortable spot—but to her, comfortable is dangerous. Her latest efforts have focused on an internal restructuring, and on travel. Lots of travel.

Mastrogiacomo spent more than four months traveling across the U.S. and Canada, wanting to experience the music community in different areas. In several cities along her route, Mastrogiacomo launched networking groups called Balanced Breakfast—a weekly meet-up of music industry professionals and musicians that she had discovered in San Francisco.

“Balanced Breakfast is a really amazing music community, because they genuinely want to help each other even though they’re in this competitive industry,” she said.

Mastrogiacomo’s travels brought her to Austin, Texas, in March of 2016, where she presented at South by Southwest with a panel of fellow publicists and writers. Titled “No Basic Pitches: Publicity By the Journalists,” the panel shared insight on making successful pitches to journalists as a publicist, examining the ethics and perspectives from both sides.

Mastrogiacomo and fellow publicists and writers on their panel at SXSW in Austin, Texas.

“Presenting at South by Southwest was on my five-year-goal plan, and I accomplished it two years in,” Mastrogiacomo said. “It was truly amazing, and is one of the things I’m most proud of.”

Mastrogiacomo’s career path was set in motion by a connection with an opening band at an Anberlin concert. That connection eventually earned her an interview with the headliner, Anberlin—which grew to multiple interviews for Infectious Magazine over several years. Anberlin has since broken up, but Mastrogiacomo has built a solid working relationship with a band member.

“The whole reason I got into music in the first place was because of Anberlin—and now I’m working side-by-side with one of the band members,” Mastrogiacomo said. “It’s kind of surreal how everything has come full circle.”